HOME PRICES ARE UP, WAY UP! 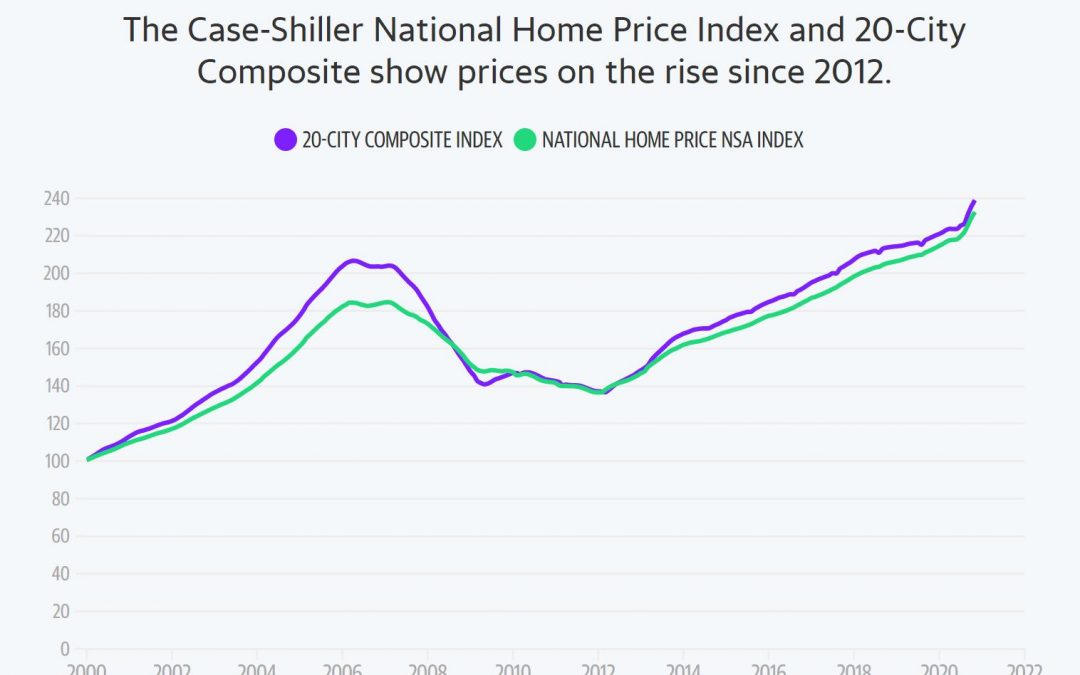 U.S. home price growth surged in the penultimate month of 2020 to a level not seen in nearly seven years.

Standard & Poor’s said that its S&P CoreLogic Case-Shiller national home price index posted a 9.5% annual gain in November, up from 8.4% in October. The last time the index reached this level was in February 2014. The 20-City Composite posted a 9.1% annual gain, up from 8% the previous month. The national and 20-City beat estimates of 8.85% and 8.7%, respectively, according to a consensus compiled by Bloomberg.

“The trend of accelerating home prices that began in June 2020 has now reached its sixth month with November’s emphatic report,” said Craig J. Lazzara, managing director and global head of index investment strategy at S&P Dow Jones Indices, in a press statement. “As COVID-related restrictions began to grip the economy last spring, their effect on housing prices was unclear. Price growth decelerated in May and June before beginning a steady climb upward. November’s report continues that acceleration in a particularly impressive manner.”

Adding to the rise in prices is a trend that seems to have been encouraged by the COVID-19 pandemic. The movement from urban areas to more suburban and rural areas of the country has accelerated.

As mortgage rates have continued to fall, owning a home has become increasingly affordable despite the rise in home prices. These low mortgage rates are good news for buyers.

The housing market is never totally predictable. However, it is clear that the supply of housing on the market is not sufficient to meet the demand in the near future.  For home buyers, now may be the best time to purchase because, with a low supply and high demand, homes’ prices should continue to escalate.

Total inventory at the end of December was 1.07 million units, down 16.4% from a month earlier and down 23% from a year ago, according to the NAR. Unsold inventory is now at an all-time low of 1.9 months’ supply at the current sales pace, down from 2.3 months in November.

While December housing starts and building permits showed that the construction of new, single-family homes is happening at the fastest pace since 2006, the uptick is unlikely to keep up with demand or make up for already depressed supply.

Experts expect home prices to end the year on a high note and increase through 2021. According to the National Association of Realtors, the median existing-home price in December was $309,800, up 12.9% from December 2019, as prices increased in every region. December’s national price increase marks 106 straight months of year-over-year gains. And it’s the highest level ever for December, according to NAR.